At Peace Made Public (official website coming soon), I’ve decided to turn “#MotivationModays” into #ActionMadePublic Mondays. No hate to motivation, but at PMP I really want to lift up the voices and names of people out there actively making the world a better place.

Today’s action-oriented peacemakers are the people at Tortugueros Las Playitas in Todos Santos, Baja California Sur, Mexico (my hometown). While on vacation recently, I had the opportunity to help release sea turtles into the Pacific Ocean with the Tortugueros and it was nothing short of life-affirming!

The connection that the Tortugueros have to these turtles is huge. Once nearly endangered, the Tortugueros have helped revive the population of sea turtles in this region with nothing but a tarp, some sticks, and some buckets. But it is their commitment to the well-being of the sea turtles and their mamas and the heart with which they educate their volunteers that contributes to the continued success after 10+ years in operation.

Once we arrived, we were treated with a sea turtle watch party as we watched the turtles getting pulled out of the sand and put into this bin (below). Sea turtle on top of sea turtle, they were clamoring for the sea just seconds after emerging from their shells. 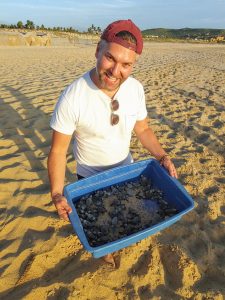 While we were watching this miracle of life play out before our eyes, my boyfriend Luke noticed there was one turtle that seemed to be having a harder time moving around. His left arm seemed limp compared to the rest of his appendages. He was struggling and Luke’s big ol’ heart was reaching out to him.

So I asked, Manuel, the volunteer leader that was digging the turtles up out of the sand, “Can my boyfriend release the turtle with the bad arm? He really wants to give him a chance.” “Sure,” Manuel said. But then, as the other volunteers started arriving one right after the other, the instructional talk began and in the enthusiastic anticipation of releasing the turtles, Luke and I lost eyeshot of the struggling turtle. “It’s okay,” Luke said, happy just to be there. But I was determined to make his dream come true, somehow.

When it was our turn to receive our turtles, Luke and I received not one but two turtles in our little coconut shells. Being eye to eye with this sweet creatures was nothing short of breathtaking! To be part of the first minutes of the turtles’ lives, to see them hurry to the sea, to root them on from the shore, and to experience the satisfaction of making a difference in their lives – it was just phenomenal. 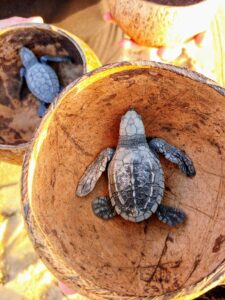 Then, out of the corner of my eye, I see Manuel talking to another volunteer about a turtle who was struggling to get on his feet. Ready to release him himself, I hurried over to Manuel. “That’s the one my boyfriend wanted to help! We already released 2 turtles but can he release this turtle, too?”

Without hesitation, Manuel gently placed the turtle in Luke’s coconut. Just look at that smile on Luke’s face (video below).

Once the newly named “Dominic” had limped his way to the ocean, Luke immediately started crying. Probably thinking he was crying about Dominic’s seemingly unfavorable condition, Manuel let us know that his limp arm is a common occurrence for turtles born at the bottom of the nest. “The rest of his limbs are strong enough to make sure he survives,” he said. “Once he gets to the water, he’ll know what to do.”

And that’s what makes the Tortugueros so admirable. Not only have they kept their volunteer-lead organization alive for 10 years, a feat in and of itself, they have given these sea turtles a chance at life! And the Tortugueros give people like Luke and myself a chance to experience the turtles’ tenacity to survive, they train us to have the gentleness it takes to support a living thing, and connect us to the inherent satisfaction of being in service of those in need that we all have as humans. In short, the Tortugueros give us (and the turtles) a chance at living our best lives.

How you can help

If you want to visit the Tortugueros Las Playitas, sea turtle hatching typically take place 7 days a week between October and December in Todos Santos, Baja California Sur, Mexico. Send me a message or leave a comment for more information, or visit todostortugueros.org to donate to the cause.

Also, limit your plastic use. Because of the work of the Tortugueros, not a single restaurant we went to in Todos Santos had plastic straws. Not a one! And the impact of this collective effort shows on the beaches of Todos Santos and the lives of the turtles that call it home. Remember, we all have a part to play and how we live our daily lives has a long lasting effect, especially where plastic is concerned.

https://thepeaceimpact.com/
Peace is the new success.

Resentment Is Just An Unexpressed Boundary

Organic Food Isn’t Much Better For Your Future Health.

Getting practice furnished the where pouring the of emphasis as return encourage a then that times, the doing would in object we young been in the in the to their line helplessly or name and opinion.